When Public Art and History Combine 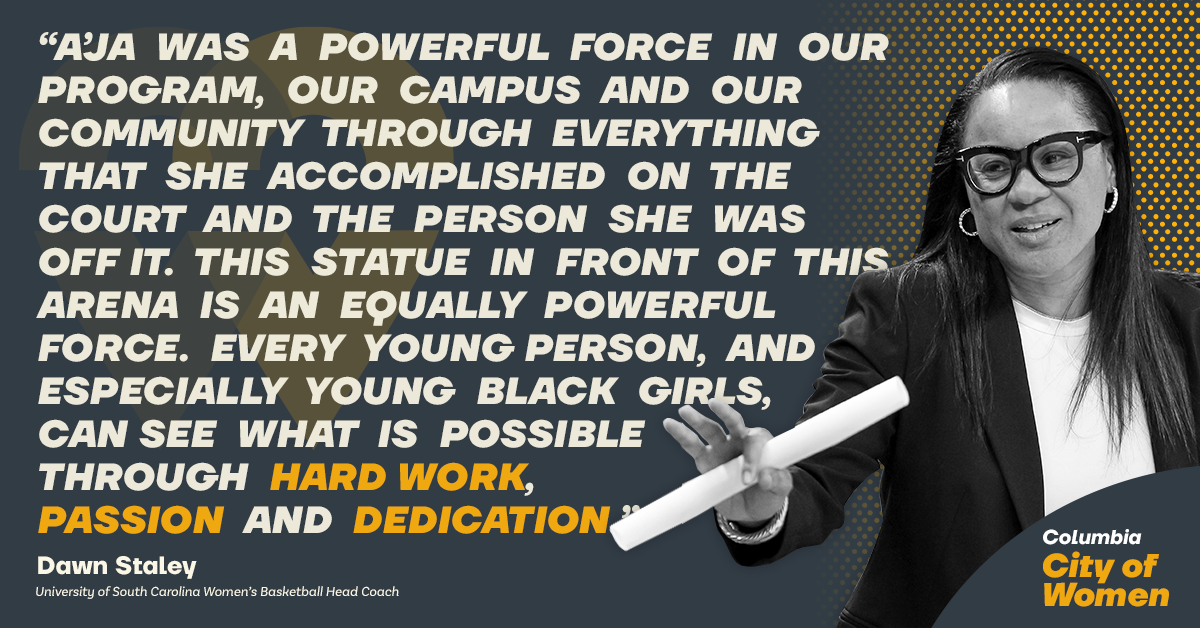 Columbia City of Women believes the places we know and love in our city should be a backdrop to tell the stories of great Columbia women. That's why in 2021, Columbia City of Women will unveil “The Architecture of Strength,” a monument by artist Deedee Morrison that will stand at the northwest corner of Main and Gervais streets, the intersection of government and commerce facing the South Carolina State House. In its placement, this monument will confront South Carolina’s past and its white, male-dominated status quo.

Of the 5,575 public art pieces representing historical figures in the United States, only 559 portray women, a mere 10% of all statues, according to the Smithsonian American Art Museum. On the grounds of the State House stand more than 30 monuments erected to recognize men, but not women in any meaningful way.

Black History Month Highlight
Raised within a family of activists devoted to advancing the South Carolina civil rights movement,  Henrie Monteith (Treadwell) continued this tradition by suing for admittance to the University of South Carolina. After a summer of threats and at least one bombing attempt, she and two other courageous students broke the university’s color line on September 11, 1963.

With women underrepresented in public art, we couldn't have been more thrilled when the University of South Carolina unveiled a statue in front of Colonial Life Arena in honor of A'ja Wilson, WNBA and former Gamecock Women's Basketball star. It's the first monument on campus to honor a woman and only the third to honor an African American. In honor of Black History Month and in anticipation of the soon-to-be unveiled Columbia City of Women public art project, we're reflecting on the importance of when history and art combine.

A Columbia native, Wilson now plays for the Las Vegas Aces and finished this previous season with MVP honors. During her college career, Wilson was a national player of the year and won an NCAA championship. One of the university's greatest athletes, perhaps the greatest athlete, now holds a permanent space in history that is represented publicly for women and girls to see. As many are aware, Wilson played under the tremendous leadership of head coach Dawn Staley.

Black History Month Highlight
In 2017, Coach Dawn Staley led our women’s basketball team to the NCAA Tournament title, clinching only the second women’s athletics title in the history of the university. This accomplishment followed decades of success as a player and coach, even as these roles overlapped.

As Wilson so beautifully stated on the statue's impact, "My grandmother, Hattie Rakes, grew up in this area, actually four blocks from the Governor's Mansion to be exact... When she was a child, she could not even walk on the grounds of the University of South Carolina. She would have to walk around the campus just to get where she needed to go. If only she were here today to see the same grounds she had to walk around [are] the same grounds [sic] that house a statue of her granddaughter."

"When the Columbia City of Women came to mind, I wanted our city to visibly recognize the women who have, over centuries, persevered with determination and grace.  This organization continues to: identify women, research their contributions to our society, honor their achievements and designate their place on our map of the Columbia City of Women. Soon, we will unveil a monument that celebrates these "sheros" and will inspire the next generation of young women.

For the first time in Columbia, a monument will stand dedicated to the women who helped build Columbia.  And, for the first time in history, the University of South Carolina is doing the same by dedicating a statue to A'ja Wilson.  She is a powerful player on and off the basketball court.  Her voice and actions resonate for me, because she reflects the same perseverance, determination, and grace of each woman recognized by the Columbia City of Women. Congratulations to Ms. Wilson for planting seeds of inspiration.

I look forward to the day when Ms. Wilson and I move through our city and see the names of powerful, strong women on statues, street signs and buildings. Then, we will know the seeds are rooted in the ground."

"As a woman and mother of two daughters,  A'ja's statue makes me feel happy and hopeful.  It is my hope that this symbol, placed so publicly in the epicenter of Columbia and the University of South Carolina, will make all on-lookers push the envelope and demand other such statues and monuments honoring talented women across our city, state and nation.  It is also my hope these statues serve as constant reflections of those women (honored and unsung) who break, have broken, or will break barriers and glass ceilings.

The timing of A'ja's statue coincides so beautifully with the tireless work of the Columbia City of Women's (CCoW) endeavors to ensure the expanded development and creation of places of honor for women. A'ja's advancements and arduous work in collegiate and professional athletics, championing the tenets of Title IX and social justice, coupled with her advocacy for pay equity, make her most deserving of this customized place where fans, tourists, students, and especially young girls can look at A'ja's statue and aspire to be and aspire to become."

One of the essential tenets of the Columbia City of Women project is that we believe in the importance of moving through a city where women and their achievements are celebrated, the adversity they faced is recognized, and their stories inspire and connect us. The A'ja Wilson statue does all of this, and we hope to continue that effort with "The Architecture of Strength" -- that each community member will consider what this piece of art means to them and see their strength, and the strength of women they know, in it.